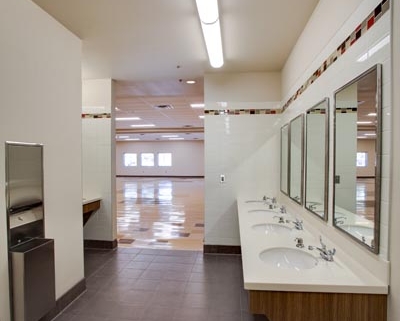 Explore Academy Charter School purchased the old ITT building on Masthead that it had been leasing for the past several years as part of an expansion plan to boost attendance and enrich their services provided to their students. Having done several interior remodels over the previous 3 years and out of room, a master plan of adding a 6,000 sqft commons area with new multi stall restrooms, a folding partition wall for assemblies and a new 4,000 sqft. Middle School academy while also converting several existing classrooms to science labs was devised and solidified. Careful phasing and planning was needed to ensure that the school year was not affected. With 10,000 additional sqft. of building to add to their services while also upgrading what they already had was a collaboration between architect, contractor and staff that worked seamlessly.

Adding $2 million dollars of additional ground-up buildings and interior construction to an existing building during the 3 months of summer break was not only NOT feasible, it was impossible. So a 3-phase approach over 8 months was carefully thought out and put in to action. During the spring school semester all exterior work was started safely and away from the student population. When the summer break began, all interior classrooms were quickly demolished and repurposed into science labs before they returned for the fall semester and the middle school academy was completed on time. After the students returned, the commons area was completed just in time for them to occupy it at the winter break. The Fire Marshal was called in constantly to make sure that they would allow the phasing plan and allow occupancy as needed.

A true collaboration of local authorities, teachers, students, architects and contractors took place on this project. All timelines were met to the day and the school’s enrollment increased dramatically once they had such beautiful new accommodations to showcase to the potential families who have come to see the end result. The added amenities to their portfolio have pushed them to the top of the Carter School list in New Mexico. At the end of the project, the contractor was proud to present the school with a CREDIT change order for finishing under budget so that they could use that money to purchase additional school supplies.